Bruce takes us (back) down to The River

I wasn’t exactly chomping at the bit to see Bruce on this latest tour, singing “The River” start to finish. It’s an album that came out when I was 18 and hung on his every word, but it was never my favorite. Too long. And too many songs that didn’t say much to a suburban Connecticut kid just starting college. Still, when a friend emailed with the offer of an extra ticket, I was excited.

“This is the first song I ever wrote about fathers and sons,” he said about 20 minutes into the show, introducing “Independence Day.”

Now the parent of an almost 17-year-old who’ll be heading to college next year, he had my attention.

“Well, Papa, go to bed now. It’s getting late / Nothing we can say now is gonna change anything…”

Standing there in the dark of the United Center I could see it. A teenager sits at the kitchen table talking to the old man, telling him sorry, but he’s outta here. Suddenly what I always knew about “The River” – an album about standing a few steps along the path to adulthood and staring back at youth – made a little more sense.

It wouldn’t have worked if he’d merely taken a few chestnuts from the 20-song album, plucked them in the middle of his usual massive set and called it “The River Tour.” Running through it in the order of the album wasn’t ideal for pacing, but it gave the event an air of propriety, as if Bruce threw the double album onto our coffee table, sat us down on the couch as he placed side one on the turntable, and defended it, passionately, song by song.

It also helped that my friend and I watched it come to life from seats behind the stage, which gave us the rare treat of seeing the pulleys and levers that make the machine go. We watched guitar techs tuning, and lighting techs climbing precarious rope ladders into the rafters. An older guy in a black tee shirt carefully soaked a large sponge in ice water, then filled several big cups, placing the array on the edge of Max Weinberg’s drum kit, ready for Bruce to cool off when needed.

We could also look out at the crowd the way he looks out at the crowd, seeing their faces. And the crowd is an integral part of any Springsteen show. It grants permission for those of us who might think we are too cool for school to let go and give in; to admit that these songs matter.

One of those songs for me was “Stolen Car,” rediscovered a few years back when my brother-in-law casually started playing it on his guitar as we were sitting around the fire. It is “The River” writ large – a man so afraid he’s lost everything that matters simply by getting married and settling down.

“I’m driving a stolen car / On a pitch black night / and I’m telling myself I’m gonna be alright / But I ride by night, and I travel in fear / that in this darkness, I will disappear.”

We watched him sing it as survivors of something like that fear; as people who can remember wondering if we were ready to go to work every day, to be married for the rest of our lives, to have one child, then two, and mortgages.

And, of course, “Stolen Car” leads into “The Price You Pay.

”You learn to sleep at night, with the price you pay…”

But I won’t take this post down the path of parsing every lyric. With the strains of his three-and-a-half hour show still ringing in my ears, I’ll just raise a cup of coffee to a man and a band that can still bring it with passion. His run-through of “The River” was followed by a break-neck sprint through a sampling of classics, including a Bruce-on-acoustic version of “Take It Easy” in honor of the late Glenn Frey.

There was “Born to Run,” of course, and “Dancing in the Dark.”

The rest of us sing along with. Every. Word. Feeling the wind blow back our hair at the same time we gently rub the scars of adolescence and smile at the idea that we once thought the world was ours. The magic of Bruce is rarely in the chorus. It’s in the verses. And “Thunder Road,” with the exception of the aforementioned, oddly incongruous repetition of the title, is one long verse.

“There were ghosts in the eyes of all the boys you sent away. They haunt the dusty beach roads in the skeleton frames of burned out Chevrolets. They scream your name at night the in streets. Your graduation gown lies in rags at their feat. And in the lonely dew before dawn, you hear their engines roaring on. But when you get to the porch their gone. So Mary, climb in. It’s town for losers. I’m pulling out of here to win.”

That’s a song that came five years before “The River,” and hearing it – and singing it – toward the end of last night’s show highlighted the progression that was those early albums. As if to shine that light even brighter, he tossed us a joyful chestnut at the end. I heard the first riff and I leaned over to my friend. “Rosalita,” I said.

And for the next several minutes I was back at a dorm party at Boston College in 1981 or 82, jumping up and down with my friends in a circle, arms on each other’s shoulders, singing at the top of our lungs, our rivers still years down the road. 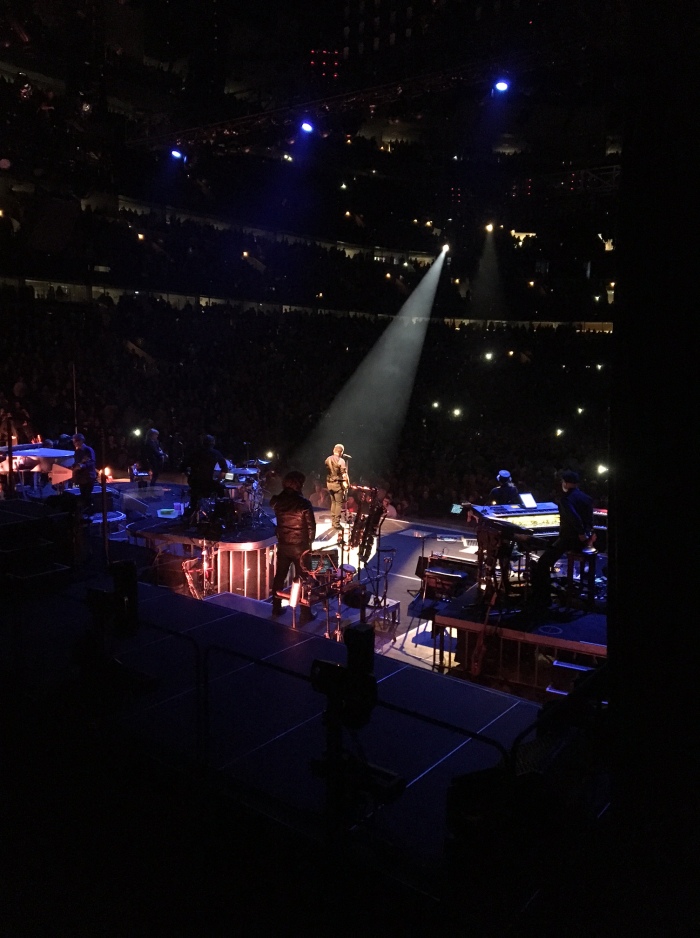