Notes on a ‘Getting Out Of Town’ Playlist for my nephew, Jack Cox 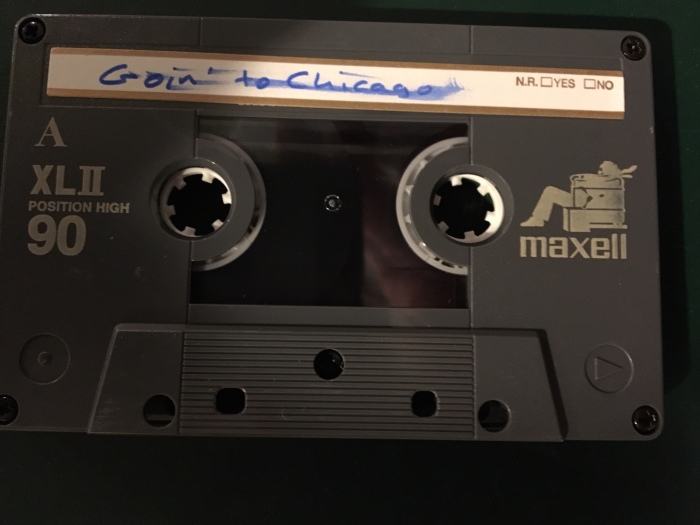 Yesterday evening I got a call telling me my 23-year-old nephew is moving from Chicago to Austin, Texas, and could he swing by in a little bit with his roommates to park a Uhaul truck at our house. I said sure, of course, then hung up the phone and flashed back to 1987, when I was about that age and picking up everything to move from Boston to Chicago.

Other than the fact that I’m farther away from my family than I’d like, I’ve never regretted that move for a second. I met my wife here, and made a career and a life. Twenty-nine years later, I am trans-regional – a New Englander and a Midwesterner.

But I also thought back to that day in February when I hit the road, having said good-bye to my roommates and friends. My dad drove the rental van and I drove my little Honda Civic, filled with excitement and trepidation and listening to mixtapes my friends shoved in my hand at the farewell party.

So, of course, I hustled to the computer to put together a mix ‘tape’  for Jack. I only had about half an hour to do it, and there are more than 6,000 songs in my iTunes library. In other words, it ain’t perfect. But what playlist is?

After I parallel parked the 30-foot truck for Jack and his pals, I gave him a hug and shoved two CDs in his hand. A talented musician, I think he appreciated the gesture. At least I hope so.

I had enough time to type up the list of songs, but thought I’d add some notes. I offer them here, for my music-loving friends to peruse and perhaps offer suggestions for more. The theme is some amalgamation of leaving town and driving and moving on and changing. I feel pretty good about this list, with the caveat that it was assembled in minutes. There are some clunkers, of course, and some omissions. But here you go.

I’ve never been one to bury the lede, so I started with “LA Freeway” by Jerry Jeff Walker. It’s by far the best get-out-of-town song I know, and if you don’t agree, to borrow a phrase from Ron Burgundy, I. Will. Fight you! Guy Clark wrote it, and I have his version. But I chose Jerry Jeff because he’s a Texan.

Likewise, I could have used the Blues Brothers  version of “B Movie Boxcar Blues” by Delbert McClinton. But the original holds up, chosen just because it’s a good road song.

I’m happy for Jack moving to Austin, which is a great place. But I had to remind him of what he’s leaving in the rear-view. That explains a nice block of blues, with “First Time I Met the Blues”  by Buddy Guy, “Mr. Highwayman (Cadillac Daddy)”  by Howlin Wolf, “Sweet Home Chicago”,  the Robert Johnson version, Taj Majal’s “Texas Woman Blues”,  “Mannish Boy”, by Muddy Waters, and “Born in Chicago”,  by the Butterfield Blues Band.

Call me quirky, but I’ve always loved “Horizon”  (as in Plymouth), by the Arrogant Worms, a stirring tribute to the nobility and resilience of cheap transportation.

No idea how “Jeannie Needs a Shooter”  wound up here. But Warren Zevon’s live version has a ragged, desperately riding into town feel to it. So I’ll stand by it.

“Southbound” by the Allman Brothers is an obvious choice for one who is just that.

And what Chicago-related mixtape would be complete without “Lake Shore Drive”,  by Alliotta, Haynes and Jeremiah. Again, Austin is great. But no Texas road can offer the thrill of mighty Lake Michigan on one side, and the skyscrapers of Chicago, rising up from the prairie, on the other.

I probably should have ended there, but stuck “The Weight” on. It has a road-weary feel. But mostly I believe it’s my obligation to expose my younger kin to the majesty of Levon Helm’s voice, and the tightest rock and roll band that ever graced a stage. The link here is to the great Last Waltz version, featuring Pops, Mavis, and the Staples Singers helping out The Band. Great stuff.

I was really hustling here, but started strong with “Rush”,” by Big Audio Dynamite. ‘Rush for the change of atmosphere … gotta get myself right out of here.’ Seems about right.

As with the Zevon song, no idea whatsoever how Big Star’s “I’m In Love With a Girl” got on here. It’s a lovely song, and Jack’s drive might take him through Memphis, where they are from. Other than that, I got nothin’.

Which is not the case for “Two Wheeler, Four Wheeler”, a trippy song about moving, albeit under more stressful, life-changing circumstances. Plus, Jack’s a song-writer. Might as well expose him to lyrics like “when the rent was way down/in the honey time of youth/ when the wind had sweet breath/I would haul for no man/two wheeler four wheeler/I could move the boxes/four wheeler yeah/oh yeah.” Somehow Trip Shakespeare makes it work. (And, yes, fellow Shakespearians, I should have put the “Toolmaster”  on the list!) Sorry.

“Two Way Action” by Andrew Bird is a song that moves, and starts with an image of the blazing lights inside a Tennessee truck-stop. Works for me.

Not offering any commentary. But Blind Faith’s “Can’t Find My Way Home”  seems okay for a young lad looking to stake a claim somewhere.

Steve Earle’s “Nowhere Road” is probably pandering to the whole southern thing. And I know, I know, there are better Steve Earle songs. I listened to this after I burned the CD, though. It holds up, even if he was trying to be the next Dwight Yoakum.

Next up is a Cracker twin spin. “I See the Light” seemed like a good movin’ on song. And “Ain’t Gonna Suck Itself”,  a ribald riff on David Lowery’s, er, feelings for Virgin Records, is a nod to Jack’s adventures in the music business.

“I Feel Free”  by Cream probably should have come after Blind Faith. Creedence’s “Lodi” seems rather obvious, but is easy to sing along to on the highway.

“Bitchin’ Camaro” by the Dead Milkmen got here just because it’s a car song. But I can’t say I didn’t smile when I heard the intro again for the first time in a decade or so. Husker Du’s version of the Ramones’  “Sheena is a Punk Rocker”  just seemed to come naturally after it, which lead me to “Standing in the Rain”,  also by Husker Du. Niether really fits the theme. But at this point in the assembly of the playlist, Jack had called and was literally minutes away.

“Me and Bobby McGee”  by Janis Joplin is another obvious choice, though I hope Jack is leaving without the regrets she sings about. Note: the version on the disc is not the single that was released, but a copy of her demo tape, which was later released on a compilation. Just her on an acoustic. Nice.

There you go. Good luck, Jack! We love you!